We have now published statistics on complaints received by Local Authorities in the 2021/22 financial year.

The data shows that over 15,000 complaints were received by Welsh Local Authorities in 21/22; this is the equivalent of 4.9 complaints for every 1,000 residents of Wales. We use this type of representation to better compare public services in Local Authorities which vary greatly in size. Complaint volumes dipped in the second half of the year, but the overall figure shows that residents are making complaints at levels seen before the pandemic.

The data shows that about 76% of complaints were closed within the target of 20 working days. Performance for the final quarter of the year showed an improvement, getting back towards levels seen at the start of the year. Lower performance in the  middle of the year probably represents the difficulties experienced by all public bodies over the winter period.

Local Authorities in Wales upheld about 45% of the complaints they closed in 21/22. This figure has remained consistently high throughout the year – with complaints about waste and refuse, which make up about a third of all complaints,  attracting an uphold rate of 70%.

Over 1,100 complaints relating to Local Authorities were referred to us in the year, which represents about 8% of all complaints closed in the same period.

We intervened in 15% of those cases, by recommending Early Resolution* or upholding a complaint after an investigation.  Since the vast majority of remaining cases were out of jurisdiction, the actual intervention rate in cases that we could consider was 99%. This is consistent with the previous quarters of the year and suggests that there are further improvement required in public service delivery.

“We’re proud to be able to show data for the full financial year – and for the first time we’re able to see more of the complaints landscape. This information allows us to look beyond the headline and consider what this performance means, both for the general public and how they experience local services, and allows us to track how those services can improve. “

“I think having this information in one place drives transparency and consistency – but more than that, it allows real scrutiny of what numbers like these actually mean. This data allows us to do more than simply consider volumes, and start using information to drive improvement in public service delivery.”

The Complaints Standards Authority (CSA) was created by the Public Services Ombudsman (Wales) 2019 Act. The CSA works to support effective complaint handling  by Public Bodies within our jurisdiction. The CSA achieves this by:

After every quarter of the year, the CSA requests complaint handling statistics from Welsh Local Authorities.

*In some cases, we may take the view that there is action that the organisation being complained about could take quickly to resolve a complaint. In these cases, we will contact the organisation involved to explain what we think might be done and seek its agreement to take that forward.

The data for the last quarter of 2021/22 is presented below. 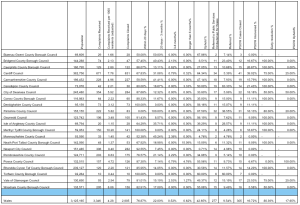